I had taken this image in 2017, but, came back to this image again in 2019. This time, I took 2 panels and joined them together to cover a larger area. Also, I took a different color scheme this time, with more emphasis on red (closer to the original data).

You may wonder why colors are changing. Basically, this is a narrowband image that I take on those nights where Moon is up and too bright to get faint data. These are emission nebula i.e. when ionization creates radiation in abundance. I put on filters for capturing this radiation that is not emitted in appreciable quantities in rays coming from Moon and therefore, I can block almost all of Moon’s rays and concentrate only on emission from these nebulae which are primarily Hydrogen Alpha radiation and some of Oxygen III and Sulphur II spectrum. In other words, Hydrogen, Oxygen & Sulphur atoms in these nebulae are ionized and those photons come toward Earth. I capture those photons but block out everything else coming from Moon. Then, I assign colors to each spectrum on a purely aesthetic basis, not scientific basis to make it look beautiful.

I see a bearded man standing in a relaxed pose. That’s just my imagination; let’s see what you think of it.

I took this image over 25 hours! I took 17 images of Hydrogen Alpha, 11 images of Oxygen III & 9 images of Sulphur II of 20 minutes each for each panel.

Of course, I am not up looking at the telescope for all of these 25 hours. However, I would guess that I spent about 5-6 hours taking this image and then about 6-8 hours putting it together and processing it.

This area is named as ‘Elephant Trunk Nebula’. At this level of magnification, it does not look like a trunk of an elephant, but, seeing through a wide-field telescope, the large column of gas in the right center of the image looks like a curved trunk. On the other hand, I see a little monster looking at us (with one eye visible) – that’s just my imagination running riot!

The Elephant’s Trunk nebula is a concentration of interstellar gas and dust within the much larger ionized gas region IC 1396 located in the constellation Cepheus about 2,400 light years away from Earth. The bright rim is the surface of the dense cloud that is being illuminated and ionized by a very bright, massive star (not in the image). This nebula contains several very young (less than 100,000 yr) stars that were discovered in infrared images in 2003. Two older yellow-colored stars are present in a small, circular cavity in the head of the globule. Winds from these young stars may have emptied the cavity.

This is another narrowband image i.e. taken with filters that block out Moon light and only let in those spectrum of light that the nebula is made of i.e. Hydrogen Alpha (for Green), Sulphur (for Red) and Oxygen (for Blue). Total exposure of 15h40m. (Ha-17, O-13, S-11 of 20 min each) 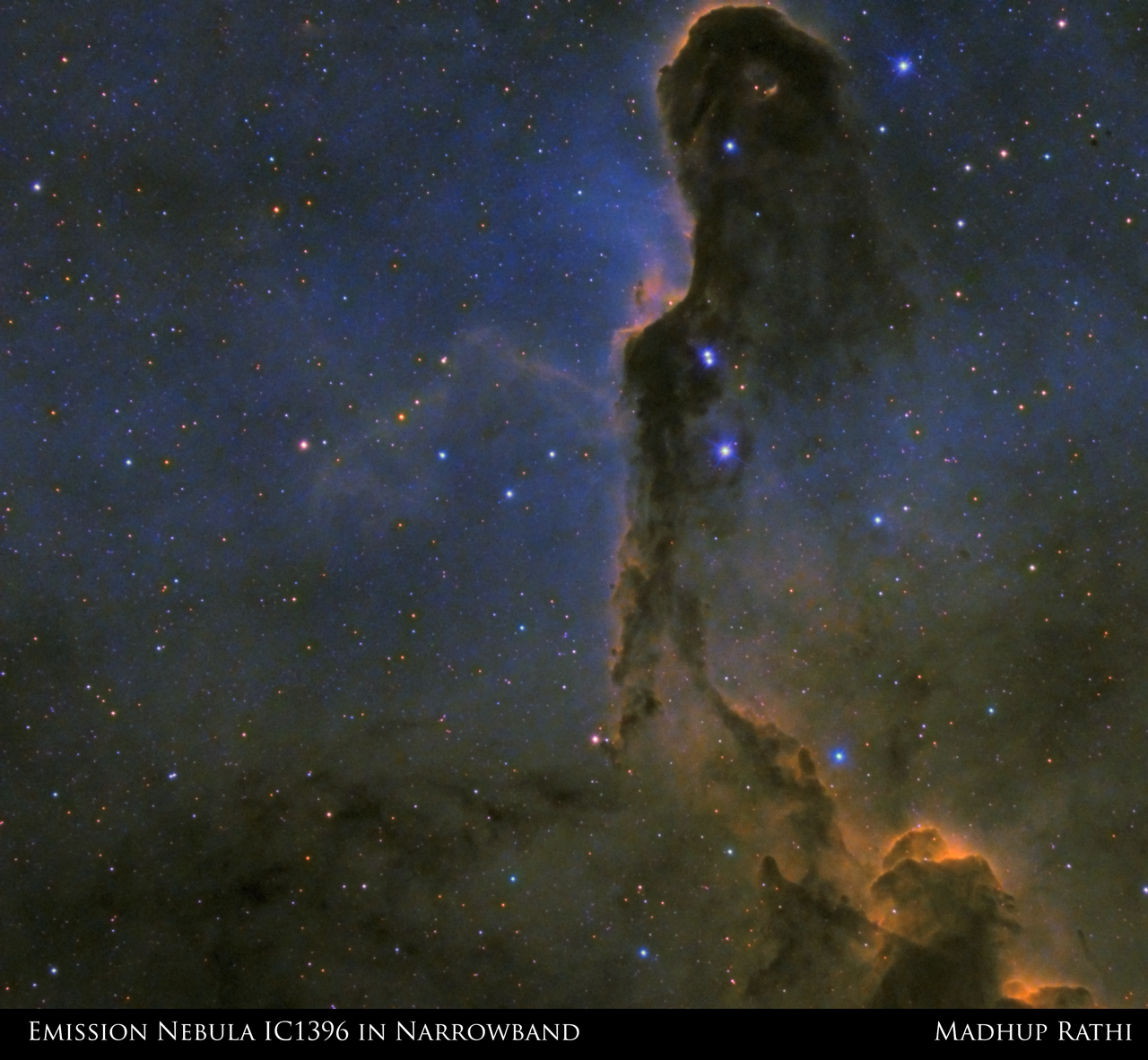