Indian Astrology, known as Jyotish in Sanskrit, is one of my primary interests. Having grown up in an environment where the destiny is considered to be a natural and indisputable phenomenon, consultations with the astrologers has been a normal course of routine. While every prediction made by the astrologer has never been true, I can say with confidence that almost 70%+ predictions have come true and some of the predictions have come true to the very day it was predicted for.

This high degree of accuracy made me got very much curious about 10 years back to learn astrology for myself. I bought many books and got immersed into learning about the subject. While I have not achieved the accuracy of prediction that experts do, I can claim to have understood some of main principles and am able to predict with about 50% success.

A lot of people ask me that how can planets influence our behavior or our luck? What happens to free will?

I can categorically say that planets or their gravitational powers do not impact our luck. Rather, they are the messengers of the destiny that the Force has in store for you. In my belief, your destiny is fixed when you are born. In fact, I go a step further than most people on this earth, including those who believe in destiny, that humans have NO free-will. The planets are also part of this fixed cycle and their position at the time of your birth is the pointer of what is destined for you.

How does the astrologer with his/her limited astronomical and mathematical skill arrive at such deductions?

Over last many millennia, Indian pundits analyzed life-events of millions of people and then correlated that to the planets’ position at the time of birth to create repeatable patterns.

The other major concept used by Indian astrologers is the ‘dashaa‘ system (dashaa=condition). Based on the Moon’s position when you were born, you are born in the running period of a given planet. You move into another planet’s dashaa in a few years (it is fixed for each planet and varies between 6 to 20 years depending on the planet) and the total cycle for all planets combined equals 120 years. These main ‘dashaas‘ are further subdivided into sub-periods using the same ratio and can still be further divided into sub-sub-periods. According to Indian astrology, each of your ‘dashaa‘ or sub-‘dashaa‘ reflects the nature of the associated planet, it’s position in a given constellation and it’s relation to other planets at that time (e.g. opposite, neighboring).  An example of a dashaa is as follows: 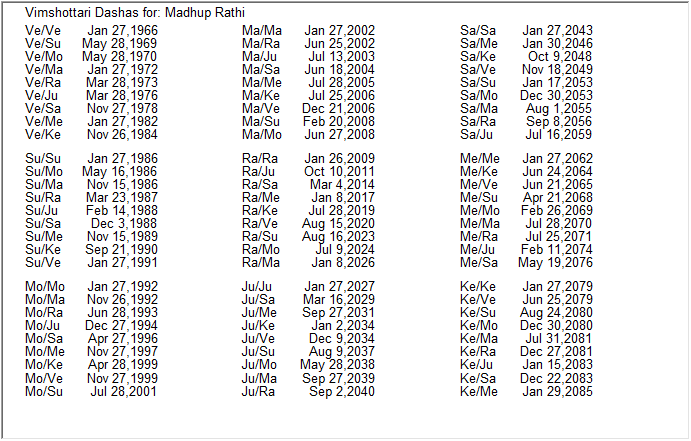 For example, in my horoscope, the dashaa of the Mars planet lasts from Jan 27, 2002 to Jan 25, 2009. In any person’s horoscope, the dashaa of Mars will always be 7 years, but, depending on when I was born, a simple calculation tells that my Mars dasha is for the period Jan 27, 2002 to Jan 25, 2009. In these 7 years, my life-events coincided with the essential natures as ascribed to Mars. For example, I had major issues with government (green card), major expenses, I bought property and a new luxury vehicle for the first time. I travelled a lot for work. These are all Mars significations. As soon as I moved out of Mars dashaa, into another planet, which signifies residential stability, my travels stopped. This can easily and rationally explained as coincidences, but, it is impossible to call random coincidence when this is true for every person on the face of the earth. YES.  I am not exaggerating – If you are consulting an astrologer and tell them about the past event of every year, you yourselves will see a pattern that fits these dashaas  and their ruling planets very neatly.

It’s all niyati – Sanskrit for Destiny.