The name Trifid refers to its three-lobed appearance. Messier 20 consists of several different objects: an emission nebula, a reflection nebula, a dark nebula and an open star cluster.

The dark nebula consists of dust clouds that absorb and block light from the bright objects behind them. It is responsible for the apparent gaps in the larger emission nebula that give M20 its trifurcated look. The other two types of nebulae – emission and reflection – make M20 glow in different colours in images.

Emission nebulae are energised by the ultraviolet light of nearby stars and usually appear red in photographs. These nebulae are clouds of extremely hot hydrogen gas and usually regions where new stars are being formed. The light of the stars illuminates the surrounding clouds, ionizing photons in large portions of the clouds.

Messier 20 is a popular target for amateur astronomers as it is quite bright, even when seen through a small telescope. It has an apparent magnitude of 6.3 and lies at an approximate distance of 5,200 light years, or 1,600 parsecs, from Earth. M20 has a linear diameter of over 40 light years and is only 300,000 years old.

I took this image over 12.5 hours (11 Luminance images of 30 min each and 7 each color data of 20 minute each). This image was taken by my permanent set up in New Mexico. 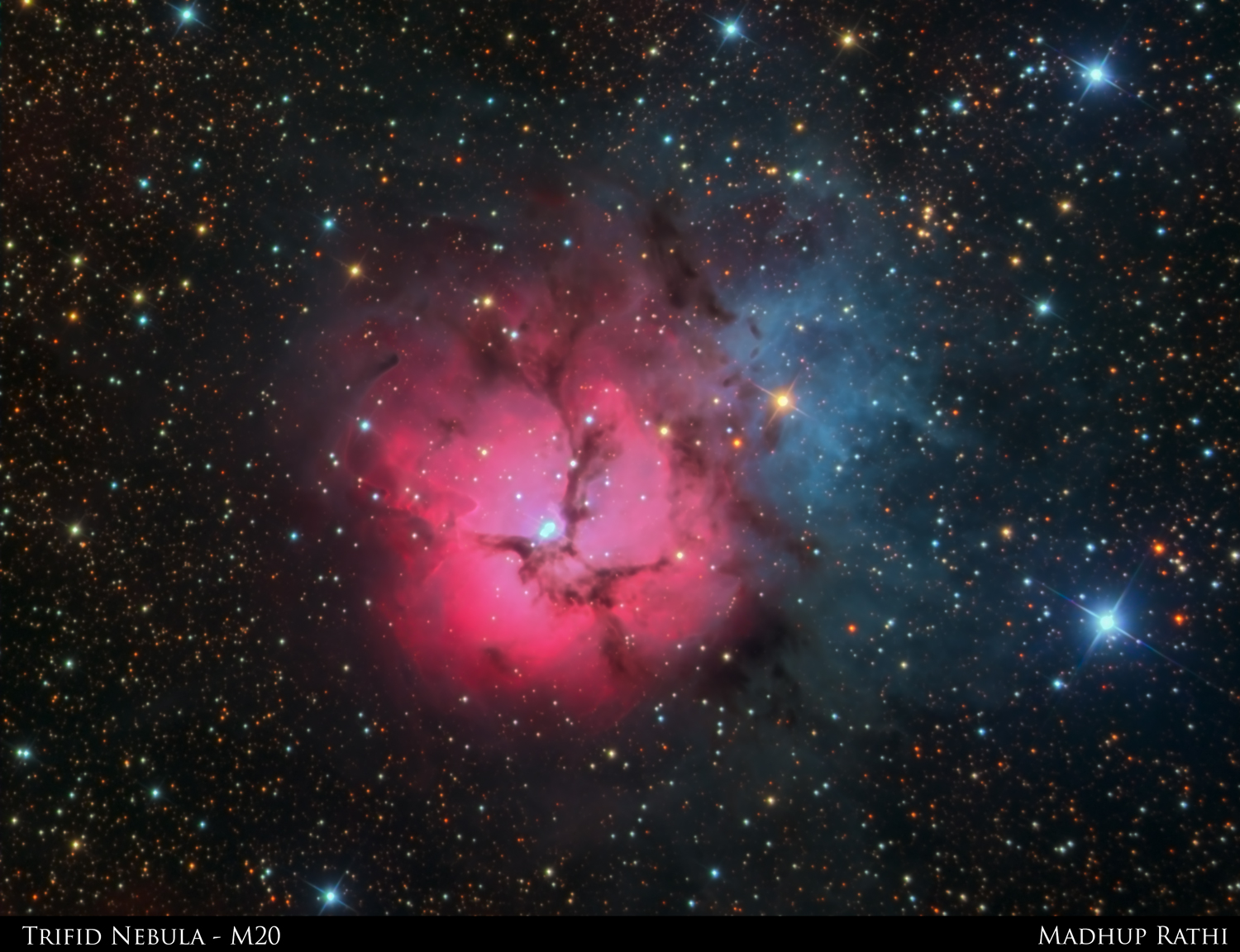 Just recently I bought a small telescope (Explore Scientific ED80 Triplet) for doing under-the-sky photography (as opposed to running my telescope remotely). I wanted to see how much data can be captured without auto-guiding the telescope. (We use autoguiding to ensure long exposure images while Earth rotates constantly). So, I put this scope on a Celestron Advanced VX mount, which is supposed to compensate for Earth’s rotation, but, as everyone in this hobby knows, you are limited to really small exposures, if you don’t do auto-guiding to account for errors in the equipment and alignments. While I tried 30 seconds and 24 seconds exposures, I finally settled on 15 seconds exposure and took 75 images @ISO3200 on an unmodified Canon T3i. I took some darks as well to get rid of noise and then stacked in MaximDL and processed in PixInsight.

This time, I went after the same area of the sky, which consists of 3 more nearby deepsky objects. In addition to capturing a much-lower magnification image of Trifid Nebula (bottom right of center), I also captured Lagoon Nebula (M8) (center-left of center), M21 (an open cluster just right of Trifid Nebula) and NGC 6544, a small globular cluster.

M8 – Lagoon Nebula is a rather large emission nebula. Classified as an H II region, the star-forming nebula has an apparent magitude of 6.0 and lies at a distance of 4,100 light years from Earth. The Lagoon Nebula is currently undergoing a period of active star formation and has already formed a sizable cluster of stars.

M21 is an open cluster located in the southern constellation Sagittarius. It has an apparent magnitude of 6.5. The cluster lies at an approximate distance of 4,250 light years from Earth. It consists mainly of small, faint stars, but is also home to a few blue giants. The cluster contains about 57 confirmed members, but is pretty densely packed. 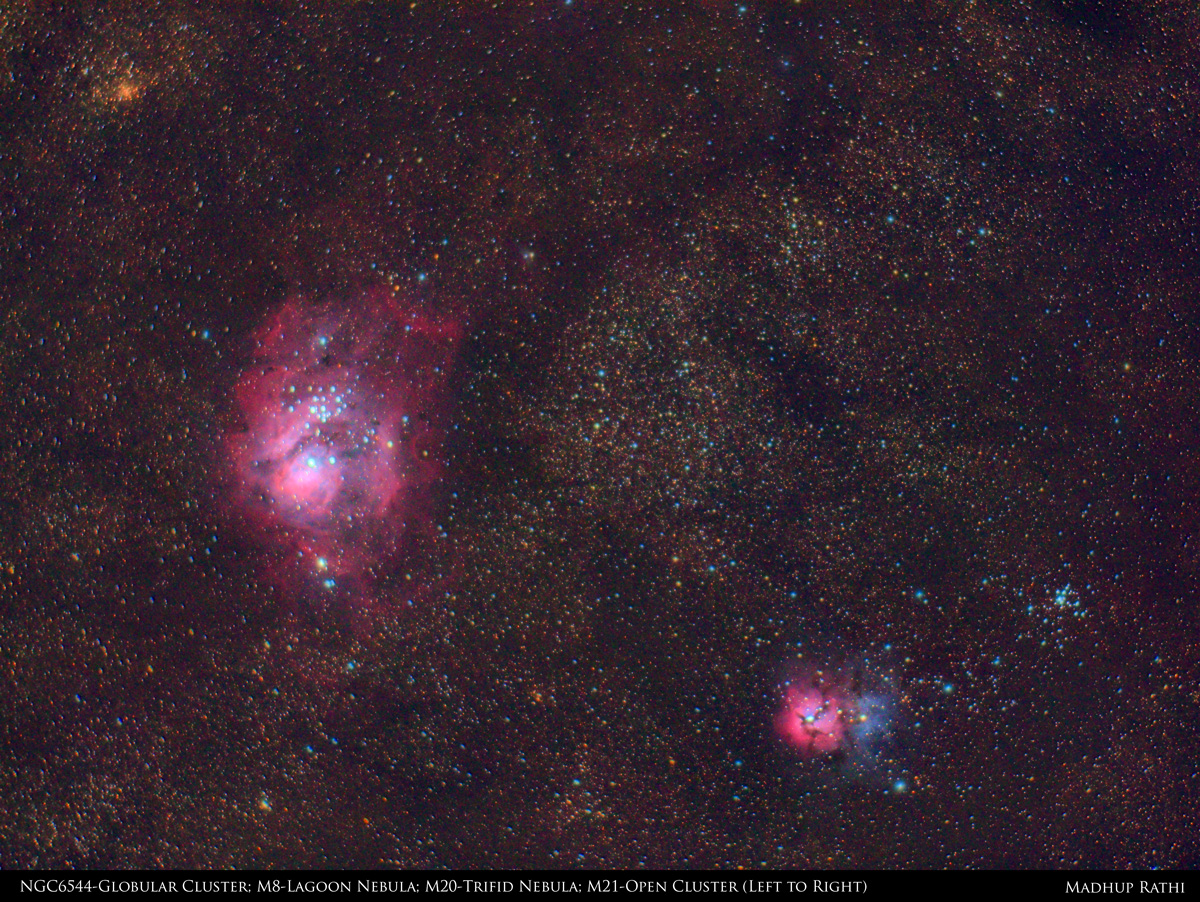 All these objects are in the Sagittarius Constellation and in the same general direction as of the center of our Galaxy. M8 & M20 look next to each other, but, that’s an illusion, as Trifid is 5200 light years away from Earth as compared to Lagoon being 4100 light years. Both of them are on our line of sight of the core of the Milky Way, but are much closer to us as Milky Way’s core is much farther away at about 25000 light years! Here is a National Geographic map of the Milky Way, which will show where these 2 objects are on the plane of the Milky Way in relation to us! (You will need to see it on a proper monitor). 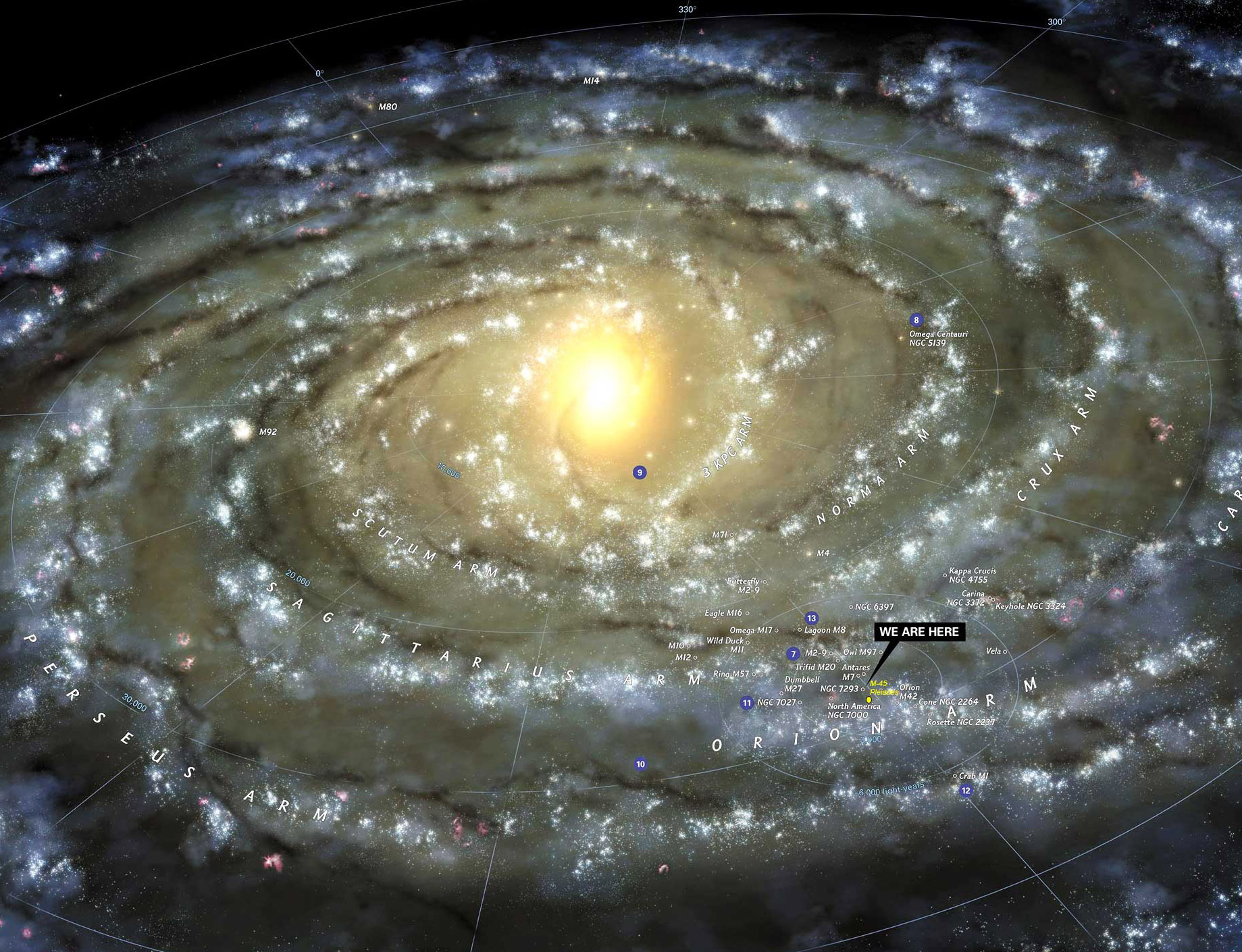